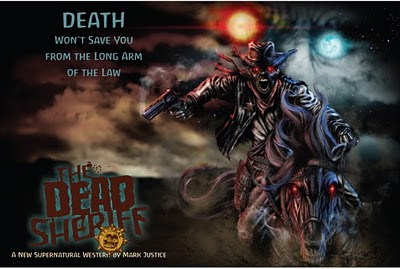 There's more to be found at Evil Eye Books.
Posted by Mark Justice at 4:38 PM 2 comments:

Donovan Pike and The City of the Gods--Chapter 5

It just went live, prose and podcast. Check it out here.
Posted by Mark Justice at 2:39 PM No comments:

Donovan Pike and The City of the Gods--Chapter 4

The latest installment of my pulp adventure serial is live. Read it or listen to it over at Pulp Nocturne.
Posted by Mark Justice at 2:42 PM No comments:

Teaser Art from The Dead Sheriff 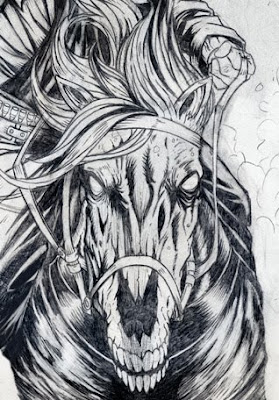 Posted by Mark Justice at 9:58 AM No comments: 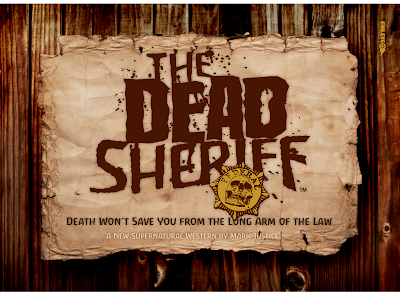 Western Dime Novel Tradition Resurrected with New Supernatural Series, 'The Dead Sheriff'
Evileye Books signs horror writer, Mark Justice, to multi-book deal, who will produce both prose fiction and graphic novels. The first comics series will debut in April, followed by book one of the prose line in fall 2010. A walking dead one.

According to legend, The Dead Sheriff was a lawman forced to watch the murders of his family before he was killed. His need for vengeance would not allow him to rest, and he rose from the grave to avenge himself upon his killers. Now he travels across the west, dispensing justice for those in need and sending the wicked to their graves.

He can never return to the grave until the western frontier is free of evil and tyranny.

The reality, however, is a little different….

So goes the premise of horror writer Mark Justice's new supernatural western tales of The Dead Sheriff, a multi-book series of fiction stories with echoes of the pulp and dime adventure novels of the old west.

"The Dead Sheriff stories bring together a few of my interests," said Mark Justice. "I love old pulp western novels and comics, and as a horror writer, it was only a matter of time before I came around to writing a story that blends cowboys and monsters."

Mr. Justice continues, "but I also wanted to explore the stereotypes and metaphors that are tried and true in the classic western tale. Take the hero figure of almost every western since the fifties. The Lone Ranger, The Cisco Kid, John Wayne, Clint Eastwood—all cut the brave, stoic loner against the world. What if the hero wasn't so pretty? What if he was not so lovable? And what of the sidekick: always silent, loyal, not much more than a talking door stop. What if there was more to Tonto, for example, than he ever let on? What? Tonto with an agenda? Most people would say that's absurd and it goes against the literary figure we have come to love. But that's exactly the kind of default characters and symbolism I want to challenge and explore in the series."

The Dead Sheriff combines elements of the supernatural, humor and adventure in a framework that models the adventure dime novels popularized as early as 1860: taking real events or people of the western frontier and embellishing them for the entertainment of the masses. The pioneer, and perhaps most famous dime novels depicting high adventures of the Frontier, were the Beadle's Dime Novels, a series which ran an astounding 321 issues before the dime novel format gave way to an emerging format in the 1920s, the magazine.

"The wonderful thing about The Dead Sheriff," said Evileye Books Editorial Director, A.N. Ommus, "is that at first you're just delighted it's a fun mash-up of popular genres. But then, as you dig into the tradition of the western dime novels, you realize the outlandish potboiler stories—even the format—are the precursors to the modern magazine and comics formats. With The Dead Sheriff, we want to resurrect, as it were, the dime novel tradition and honor its contribution to both fiction and comics."

Under the terms of the deal, Mr. Justice will write a series of graphic novels in the style of the Sunday comics of the thirties and forties, the first of which will debut this April as a series of weekly webcomics on the upcoming Evileye Books Online Reader.

Debuting later this year, the first prose book, The Dead Sheriff: Zombie Damnation, will be published in a similar format to the original dime novels of the nineteenth century.

Mark Justice is the author of Deadneck Hootenanny and Dead Earth: The Green Dawn (with David T. Wilbanks). His short fiction has appeared in Damned Nation, In Laymon's Terms, Legends of the Mountain State 1,2 & 3, The Horror Library Vol. 2 & 3, The Avenger Chronicles, Dark Discoveries and many other anthologies and magazines. Mr. Justice edits Story Station, an online Young Adult fiction magazine. He also produces and hosts the popular genre podcast Pod of Horror. His next novel, Dead Earth: The Vengeance Road (with David T. Wilbanks) will be published in 2010 by Permuted Press and his first story collection Looking at the World with Broken Glass in My Eye will appear from Graveside Tales in 2010, as well. He also hosts a morning radio show in Kentucky, where he lives with his wife and cats.

Pulp+Pixel Entertainment Co. is an intellectual property rights management company.
Posted by Mark Justice at 11:18 AM No comments: