Matt at Shocklines now has DEAD EARTH: THE GREEN DAWN up for pre-order. You can pick up the hardcover here and the trade paperback here. Your credit card won't be charged until the order ships.

There's no risk. It will be part of Shocklines' New Voices Guarantee program. If you think it sucks, you can get a full refund.

This is a limited editon, so the print run is not huge. Order early to make sure you get a copy.

Hardcover and trade paperback.
Posted by Mark Justice at 2:15 AM 2 comments:

C. L. Carnley at The Dark Krypt has accepted my story "Their Terrible Song". You can read it here.
Posted by Mark Justice at 7:56 AM 1 comment:

Coming in Winter of 2007 from PS Publishing:

A Novella of the Apocalypse by Mark Justice and David T. Wilbanks with an Introduction by Gary A. Braunbeck.

Jubal Slate is a young deputy sheriff in a sleepy desert town in New Mexico, looking forward to a blissful marriage and settling down with the woman he loves.

But something is wrong with the sky, and once the contagion sweeps into Serenity, he finds out how fragile his dreams for the future really are.

And what could the dying government worker have meant when she mentioned a dead army?

From the Introduction by Gary A. Braunbeck:

“From its grabber of an opening line to its final, powerful passages, this novella is pitch perfect every step of the way. I don’t know that I’ve read anything in the last 6 months or so that has so kept me on edge, that has so engaged my emotions, and that has made me laugh out loud at the damnedest, most unexpected times.”

Other raves for this action-packed novella:

"Messieurs Justice and Wilbanks manage to blast new life into the zombified sub-genre of the living-dead. Their novella DEAD EARTH: THE GREEN DAWN packs more dramatic power than the typical zombie novel. The characters come alive on the page--the question is: how long will they stay that way?" -- Randy Chandler, author of BAD JUJU and HELLz BELLz

"There have been quite a few zombie stories floating around lately, but DEAD EARTH: THE GREEN DAWN is less concerned with zombies and the blood and gore that accompany them than it is with the characters surrounding them. Mark Justice and David Wilbanks wisely and skillfully populate their story with vivid characters we're allowed to take time to get to know and care about. And while we're doing that, the writers gradually build a sense of dread that steadily becomes smothering. By the time the flesh-hungry zombies stagger onto the scene, the reader is in such a state of panic, he's ready to scream. DEAD EARTH: THE GREEN DAWN marks the welcome debut of two talented new writers to the horror genre, and I look forward to their next work." -- Ray Garton, author of THE LOVELIEST DEAD

"DEAD EARTH: THE GREEN DAWN is a rich tapestry of post-apocalyptic horror, fully-realized and wonderfully written. Unique and surprising, this is sure to please readers who enjoy end-of-the-world fiction." -- Brian Keene, author of THE CONQUEROR WORMS and CITY OF THE DEAD

"Green skies, grey skin, yellow pustules ... the end begins like this. A thrilling, brutal apocalyptic novella - a cross between Romero, King, and the classic 'The Body Snatchers' - this one will have you watching the skies for months to come." -- Tim Lebbon, author of DUSK and BERSERK

"There are, it sometimes seems, a million zombie stories out there. DEAD EARTH: THE GREEN DAWN is not like any of the others. Filled with well-crafted characters, a fast plot and enough action for a dozen novels, the story pushes past the boundaries that have been set before and rises to a new zenith. If you're tired of the same old undead, try the new improved model."-- James A. Moore, author of BLOOD RED

This novella will be available in hardcover, signed by the authors and Gary A. Braunbeck

Trade paperback signed by the authors.
Posted by Mark Justice at 2:16 PM 1 comment:

Pod of Horror #15 is here and it’s jam-packed with meaty, maggoty morsels of mirth and mayhem, including:

* Stop the presses! Mark Justice has been paid by Gothic.Net!

* The debut of POH book reviewer, Scott Bradley, with an insightful look at Douglas Clegg’s THE ATTRACTION!

All this, plus Poop and Prizes on Pod of Horror #15. Download it at I-Tunes or direct to your desktop at: http://www.horrorreader.com/horror_reader/pod_of_horror/index.html

And be sure to drop by the new Justice & Wilbanks message board at: http://horrorworld.org/v-web/bulletin/bb/viewforum.php?f=78
Posted by Mark Justice at 4:25 AM 1 comment:

I just found out this morning that I sold a story to Horror Garage magazine. "The Diminishing Man" will be in HG #12, due out in about a month.

Why Real Life and Cartoons Should Never Collide 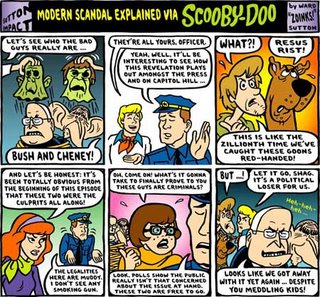 Posted by Mark Justice at 6:32 PM No comments:

So it looks like David T. Wilbanks and I can finally spill the beans about our book.

I know, I know. You haven't been able to sleep. The tension has caused you to start drinking heavily.

But the pain comes to an end Monday. That's when Pod of Horror # 15 debuts and all will be revealed.

I've Been Paid by Gothic.Net

I don't think Hell has frozen over. Earth isn't falling into the sun. I haven't entered a parallel dimension.

Listeners of Pod of Horror and regular readers of Department of Justice know that since December 2003, I've been owed money by Gothic.net for my story "Hole in the Sky".

Thanks to horror mediator Matthew Warner, I've been paid. (I just noticed that Johnathon put up Matt's picture over at the POH page. Good for Matt. I say that even though I'm envious of his full head of hair.)

If you're interested, I'll explain all on Pod of Horror #15, which goes live on Memorial Day.

(We also debut a new book review feature. I think you're going to like it).
Posted by Mark Justice at 7:57 AM 1 comment: 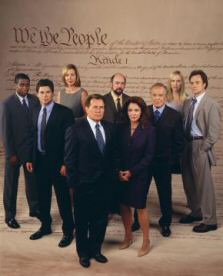 With a whimper, The West Wing ended Sunday night. For three, maybe three and a half seasons, it was the best-written show on television. The White House staffers on the show were flawed, smart people who cared deeply about doing the right thing during the time they had stewardship of the nation.

In other words, it was a fantasy.

In a TV rarity, the show wasn’t afraid to engage in lengthy, talky debates about issues. And the show had style, specifically the innovative Walk ‘n’ Talk shots pioneered on Sports Night by writer-producer Aaron Sorkin and director Thomas Schlamme.

After Sorkin quit or was forced out or was abducted by Venusians, it stopped being a smart show and turned into a typical TV dama, with an excellent cast reciting words that were beneath them. It was like watching beloved friends who had all suffered some sort of unexplained head trauma.

But when it was good, The West Wing was magic, and never better than the second season episode “Shibboleth”, better known as The Thanksgiving Episode. It has everything: humor (C.J.’s choice of turkey to pardon, followed by the second pardon when she finds out the loser is set to be cooked), drama (does President Bartlet let the Chinese Christian refugees stay?) And the patented Sorkin reach-for-the-tissues moment when Bartlett gives Charlie a carving knife with an interesting pedigree.

It also wraps up – as most early episodes did – with a nice piece of writing, as President Barltet has just admitted that he arranged for the refugees to stay:

Josh: So the guy passed the test, huh?

They made it to the New World, Josh.

You know what I get to do now? I get to proclaim a National Day of Thanksgiving. This is a great job.

That’s good stuff. The West Wing was a world where politicians (at least some of them) behaved the way we wished they would.

Now it’s over, but Sorkin will be back in the fall, along with a few West Wingers, with a new show.

Earlier today, YouTube had NBC’s “upfront” presentation of the Studio 60 on the Sunset Strip to advertisers. It’s about six minutes long and, man, it crackled. Now it's been removed, but here's a 30 second promo.

It looks like my Thursdays are gonna be spoken for.
Posted by Mark Justice at 7:13 PM No comments:

My reading of "The Harvest" is up for a week at The Late Late Show.

You can download it at the site or from I-Tunes by subscribing to The Late Late Show Podcast.
Posted by Mark Justice at 6:54 PM No comments:

Have you ever blown your nose, felt the booger come out and then when you open your tissue to check if it really was the size of a Matchbox Car, there's nothing there?

Where did the nose grape go?

I theorize that the blowing of the nose can sometimes create a small rip in the space/time continuum between the nostril and the tissue, propelling the booger into an alternate dimension existing at a slightly different frequency on a quantum vibrational level.

If this is true, then it's possible that some other-dimensional guy is walking along minding his business when he gets a booger in the eye. That's tragic.

And I don't believe that Bodily Function Dimensional Transference is limited to the nose.

Have you ever farted and noticed there was no smell?

I Have To Move

Our once peaceful middle-class neighborhood has turned into what my wife calls "Jerry Springer Avenue".

Our daily ritual includes dealing with the guy on his loud Harley who cruises slowly up and down the street every evening gunning his bike so everyone will notice what a cool badass he is, the illegal tractor trailer parked next door, the neverending chainsawing of trees across the street (because where we live, apparently no one can be happy until all trees are gone forever), and the neighbors who sit on their back porch talking on the phone until 2:00 A.M. every night in a voice loud enough to ensure that we have to hear their every word.

Do I really need to know that this chick has a yeast infection?

So if you know of a nice place in a quiet neighborhood give me a shout. Maybe a neighborhood in Florida or Oregon.

Here's my new motto: Anywhere But Here.
Posted by Mark Justice at 6:45 AM 2 comments:

We follow up our longest show yet with our shortest as Pod of Horror becomes...Pod of Nanci!

Download it at I-Tunes or direct to your desktop here.
Posted by Mark Justice at 12:41 PM No comments:

You can chat with David T. Wilbanks and me tonight at 9 eastern at The Red Light District. We'll talk Pod of Horror, Pulp Nocturne, nuclear proliferation and the use of shadows in the films of Ingmar Bergman.

Or maybe we'll just make fart jokes. Drop by and see.
Posted by Mark Justice at 9:41 AM No comments:

What's the difference between Dick Cheney and Bill Clinton?
When Bill Clinton shoots somebody in the face, they don't end up in the hospital.
Posted by Mark Justice at 8:21 AM No comments:

My story "The Harvest" is up now at The Late Late Show. You can read it free here. Later this month an audio version will be available. I'll let you know when.
Posted by Mark Justice at 5:24 AM No comments: