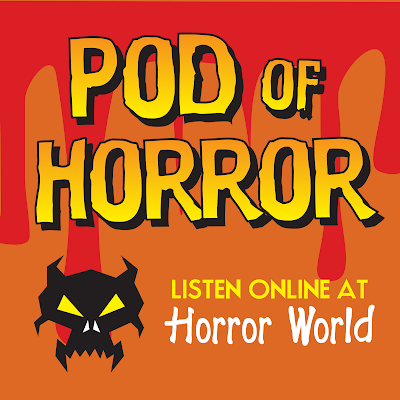 Is the horror bubble about to collapse? Find out on PoH #45 from the man in the know, Lesiure’s Don D’Auria (hint: we won’t be changing our name to Pod of Horticulture). Also, Richard Laymon’s early novel, THE WOODS ARE DARK, has been restored by his daughter Kelly, and she tells us about it. We talk to crime writer Duane Swierczynski about SEVERANCE PACKAGE and Marvel Comics. Nanci has the news in The Call of Kalanta. The Tomb of Trivia is loaded with free books. And we introduce the new PoH book reviewer. Pod of Horror is hosted and produced by Mark Justice.

Mark’s MySpace page.
Posted by Mark Justice at 7:32 AM No comments:

The Ears Have It

You want to know which post on this blog gets the most hits? My witty radio anecdotes? Writing updates? Photos of my beautiful hairless scalp?

It's An Honor To Just be Nominated. Really.

Dead Earth: The Green Dawn has been nominated for a British Fantasy Society Award in the novella category. Here are all the novella nominees:

The awards will be handed out in September at Fantasycon in Nottingham.

Here's a link to all the nominees in every category.

UPDATE:
New Writings in the Fantastic, the anthology I didn't know I was in (see post below), has been nominated in the Anthology category.
Posted by Mark Justice at 2:17 PM 1 comment:

In 2003 I wrote a quiet horror story called “Martin’s Walk” about an old man who loses his wife, then tries to hold on to part of her by continuing the long hikes they used to take in the woods behind their home.

It was rejected a few times for being too sentimental or for an ending that was hopeful. I couldn’t argue with either of those assessments. Despite my best efforts, a certain percentage of my horror output seems to offer up the possibility that there may be something in life worth celebrating or that the universe occasionally doesn’t loathe us.. That’s probably a big reason I haven’t been more successful.

Finally in late 2004/early 2005, the story sold to a magazine called Strange Pleasures. After a year or so it had not appeared in print, and I contacted the editor, who told me – well, honestly, I can’t remember what he told me. The publisher was having money problems or the magazine was switching publishers. But he assured me the story would appear.

I moved on, and ultimately forgot about “Martin’s Walk”.

Until a few days ago.

I received in the mail a book called New Writings in the Fantastic, edited by John Grant. I assumed this was a book someone wanted me to review for Pod of Horror. But, folded up inside, was a letter from the editor who had accepted “Martin’s Walk” for Strange Pleasures, the real guy behind the John Grant pseudonym (or, as an old friend on mine calls it, “pseudo-name”, which I kind of like).

The letter apologized for the delay in getting the book from The United Kingdom to Kentucky. Apparently it was published in 2007. Sure enough, “Martin’s Walk” was included in the book. How it went from a magazine to anthology I can’t really say. I’m also not very happy with the lack of communication regarding the story’s eventual publication. But I read “Martin’s Walk” again and I liked it.

It has its rough patches. I would loved to have had the opportunity to polish it up and cut about 700 words from it. Still, it came from the heart, and the characters still feel as alive to me as they did when I wrote it. It remains one of my wife’s favorites among my stories.

If I ever have another collection of my short fiction I’ll probably give the story a wash and wax before including it. For now, I’m fairly happy with it, even if I didn’t know it had been published.
Posted by Mark Justice at 8:26 AM 6 comments:

Bill and Me, Part Two

Seeing Hillary suspend her campaign today and eloquently endorse Obama reminded me that I never got around to telling you about talking to Bill Clinton.

Clinton’s people set up a telephone interview for the day of the Kentucky Primary, less than a week after I almost-but-not-really met the former president.

The staffer told me I had five minutes on the air with Bill, and she would call my cell to let me know when time was up. But as soon as Clinton began to speak the schedule went out the window.

Clinton was charming, funny, persuasive. Everything you would expect. And did I mention long-winded?

His answer to my first question took six minutes. Right after the second question, my cell phone rang. Time was up.

Before he paused long enough for me to cut in another six minutes passed.

When he took a breath, I said, “Mr. President, I know your time with us is over. I want to thank you for coming on the show.”

“Wait!” he said. “I haven’t told you why Hillary is the candidate for Kentucky.”

And he told me for four more minutes. My five minute interview went almost fifteen.

It was probably the biggest “get” of my career, and I would have been excited had it been Jimmy Carter, George H.W. Bush or the current occupant of the White House.

Which brings me back to this afternoon, and Hillary’s speech. While watching it I was struck with a feeling – and I think I can be objective enough to say that this feeling was non-partisan and non-political, for that matter.

Here was a woman who had garnered roughly half the votes and delegates in her party, and she was endorsing a black man who stands a very good chance of being elected to the highest office in the land.

That feeling I had was pride in our people and our country.

Yeah, it will pass and I will soon be back to my good ol’ cynical self.

But for now it’s nice.
Posted by Mark Justice at 4:57 PM No comments:


Ran across a quote today that I liked:

Sounds about right.
Posted by Mark Justice at 4:07 PM No comments: 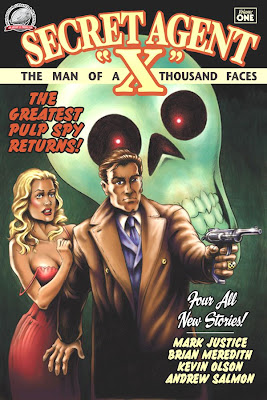 Pulpmaster General Ron Fortier’s Airship 27 Productions has reprinted the first volume of Secret Agent X, which includes a long story from me. Folks, this is pure pulp fun at it’s finest. Good guys, bad guys and non-stop action. Here’s the official press release. There’s a link for ordering at the end.

Airship 27 Productions and Cornerstone Book Publishers are happy to announce the reprinting of SECRET AGENT X – Volume One. The greatest pulp spy of them all, the Man of a Thousand Faces, is featured in this thrilling collection by four modern day masters of action adventure writing. “We’re very excited about having the book available again,” said Airship 27 Prod. Editor, Ron Fortier, who was responsible for creating this series of all “new” pulp stories featuring classic heroes from the 1930s.

This new, re-edited edition contains three of the original tales; The Skeleton Men of Calcuatta by Kevin Noel Olson, Cult of the Walking Dead by Mark Justice and The Cold Touch of Death by Brian Meredith.

This new edition also features a brand new Agent X thriller, The Icarus Terror by Andrew Salmon. “Our plan for these reprint editions was to enhance them with new features,” Fortier explained. Artist Rob Davis’ cover has also been beautifully modified with digital colors by Shane Evans.

A popular pulp hero, Secret Agent X, remains one of the most remembered features from the golden age of the pulps. A reprint edition of Volume Two is in the works and later this year Airship 27 Prod. will begin production on an all new Volume Three.

“Secret Agent “X” and The Icarus Terror” by Andrew Salmon

Production and design by Anthony Schiavino, update by Rob Davis

Rachael Ray, Talk Dirty To Me

Hand me the Extra Virgin Olive Oil.
Posted by Mark Justice at 6:11 PM No comments:

Nothing fair and balanced here.
Posted by Mark Justice at 6:06 PM No comments: