Bill and Me, Part One

A couple of weeks ago I got a call from a friend of mine who has deep ties to the Kentucky Democratic party.

“Do you want to meet Bill Clinton?” she said.

Two days earlier Chelsea Clinton came to town to open a campaign HQ for her mother in a, ah, less than ritzy part of town.

As part of my job I have to be reasonably well informed about events in and around this area, so I expressed surprise that Bill would be able – or even want – to slip into town unheralded.

“So where did you hear about it?”

She named her source, a well-known political wife in Kentucky who also happens to be a former Miss America.

Since Hillary’s HQ was about six minutes away I told her I’d be there. After all, it was a chance, albeit slim, to meet a former president.

(Digression: my point in telling you this story is not to influence your vote, but to simply entertain. I would be happy for the chance to meet any president, past or present. And so would you. So shut up.

Having said that, before you vote in November look around at the state of the nation. If you’re happy with the way things are going, you know who to vote for.

By the way, if you honestly think things are going well you probably need a check-up from the neck up...in my opinion, of course.)

My coworker Jim was in the office, so I asked him if he wanted to go meet Bill Clinton. He did, and we headed for the big event.

As we pulled onto the parking lot of the Hillary Headquarters – strategically located next to a Dollar General store for your shopping convenience – Jim noted the lack of any security or police presence.

There were maybe a dozen people standing in front of the building, including my friend and three really, really old guys.

As soon as we got out of the car we were approached by a young man in a suit who acted like he had just power-chugged a dozen Red Bulls.

He shook my hand and said, “If the media talks to you, stick to the talking points.”

Wow, I thought, the media might be talking to me. Excited beyond words, I decided not to tell him that Jim and I were the media.

“Do you have the talking points?” he said.

He ducked into headquarters, returning in a minute with a couple of Hillary For President posters and some stapled papers. He passed the campaign materials to us, then disappeared in a blur, like The Flash.

So we stood there for a few minutes, Hillary posters at our sides, while we waited for Bill. Eventually I glanced at the talking points and discovered that today’s event was the kickoff to a statewide salute to veterans.

About that time Speedy returned.

“We’re gonna take a picture,” he said, “so I need you and the other veterans to come over here and wave your Hillary signs.”

Jim and I looked at each other, then at the three really, really old men who were looking back at us.

I have nothing but the highest respect for our nation's veterans. I didn't want to impersonate one.

“Bill?” Speedy scrunched up his face in a way that made it clear that I was interfering with his carefully prepared plans. “Bill’s not going to be here. Where did you hear that?”

Jim pondered this nugget of information for maybe 1/50th of a second. “I’m ready to go. You ready?”

We beat feet to the car. As I climbed in, Speedy shot me a nasty glance. Understandable, since two-fifths of his complement of veterans just walked away.

As we pulled out of the lot, I waved my Hillary sign in solidarity.

That poster is now hanging in my mother’s window.

Next time: How I finally talked to Bill.
Posted by Mark Justice at 9:02 AM 4 comments:

Because of the tough economy, Delirium Books is dramatically downsizing their publishing schedule. One of the casualties of the cuts is the trade paperback edition of my collection Bone Songs. Delirium will still publish the limited edition hardcover of the book, which has been pushed back to April 2009.

I’m free to shop the trade paperback to other publishers, but I imagine it will be a tough sell because 1) I’m not a big name and 2) collections generally, I’m told, don’t sell as well as novels.

However, if I do find a publisher for the Bone Songs paperback it will be a different book than the hardcover.

I plan to use the two stories that made up the sold-out Deadneck Hootenanny to bookend the collection. I’ll also add a few other pieces that weren’t written when Bone Songs sold to Delirium.

I’ll let you know when and if anything develops. Now back to the novel in progress.
Posted by Mark Justice at 1:29 PM No comments: 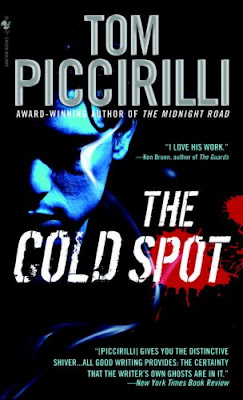 Pod of Horror #44 brings you two titans of terror! Tom Piccirilli takes us down the dark, mean streets of Noir as he discusses THE COLD SPOT and crime fiction. Gary A. Bruanbeck talks about COFFIN COUNTY and the future of Cedar Hill. Nanci puts on her best PJs for The Call of Kalanta, and the pile of prizes grows larger in The Tomb of Trivia (plus a special guest appearance by Bill Clinton. No, really). Pod of Horror is hosted and produced by Mark Justice. 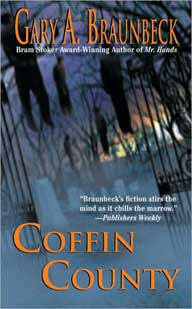 Download it at I-Tunes or direct to your desktop .

Get Pod of Horror merchandise .

and Mark's MySpace page.
Posted by Mark Justice at 4:29 PM No comments:

There's a new Pod of Horror coming this weekend with a solid lineup. Meanwhile, here's a nice plug for the show. Thanks to the mysterious Mr. Allard.

Bonus points for anyone who knows where the name "Kent Allard' originated.
Posted by Mark Justice at 7:16 AM 2 comments:

But I'm doing it anyway.

That's right, it's the opening credits for BJ and the Bear.

You Can't Always Get What You Want
By Mark Justice

Pinwheels of light in his eyes. Snakes crawling through his head.

So it had been when he was killed, so it remained as he stumbled, shucked and hopped across America, a rotting, flaking marionette whose strings were controlled by vengeance and an indifferent universe.

Indifferent, though not without a wicked sense of humor. Resurrection, with an eternal chaser of the meth he had swallowed in the car before the show and the gun.

The gun...did that come before the jangling electric caress hit his nerves?

Didn’t matter. For nearly twenty years only one thing did.

When the good, clear thoughts hit, he remembered a leather vest and eyes deader than his own, while words pounded into his skull: asiamesecatsquirmingdogthesweetestpet

He had tried to kill the dancing devil, the slithering beast, that much he knew, then came the sharp thing over and over and the bludgeoning and he was done. They dumped him in the ground, where he stayed until that beat slammed into his brain again, and he woke up still cranked, digging out of the grave and dancing across the desert, the words scorching his torpid thoughts:

Searching for the leather vest and dead eyes.

Legends sprang up around him. He felt the whispers and knew the names they called him: The Dust Man, Easu, Lonely Boy. They felt him in their dreams as he passed. The dark light of his craving casted shadows on their souls. Some had seen the leather vest, and those memories guided him from one side of the country and back again. He walked between thoughts, his feet never touching earth, until it ended back where it had began.

The leather vest was gone, the dead eyes replaced by first recognition, then fear. Words sputtered forth in a cacophony of desperation. They might have said I’m sorry or don’t hurt me or under my thumb. It didn’t matter. Nothing did.

Soon enough it was done. As his murderer floated away, he fell to his knees, waiting for the rhythmic babel to finally end, to free him. To end him. But as the moonlight spiraled comet trails of colors, the words

grew louder, and he could not scream.

A tall thing detached itself from the surrounding darkness. A hidden observer.

It was Him. The Beast.

A hand was extended, and a crimson tongue caressed ruby lips.

“Please to meet you,” the Beast said to him. “Hope you guess my name.”

And he knew, The Dust Man knew, he wasn’t finished yet.

Posted by Mark Justice at 2:06 AM No comments:

Like the rest of America, I saw Iron Man this weekend, and I came away with increased respect for Marvel.

In case you didn’t know, Marvel has taken over the production/financing of their own films. They partner with a distributer (Paramount, in this case) but Marvel is calling all the shots. And to my total and complete surprise, they have a success on every level. Directing, acting, script, effects...it all works. Robert Downey, Junior as Tony Stark was one of those didn’t-see-it-coming bit of casting, yet, in retrospect, he was the perfect choice.

In a cool bit of inspired film crafting, they even included the now-obligatory after-the-credits scene that, in Iron Man’s case, was a nod and a wink to comic book fans everywhere.

It makes me hopeful for The Incredible Hulk in a few weeks.

***
News on The Avenger Chronicles: since my last posting about it, I have now completed a second story, this one a collaboration. And I was just told by Moonstone that both stories will be in the trade paperback and limited edition hardcover. Yay me.
Posted by Mark Justice at 5:33 PM No comments: