Even Bigger Bonehead of the Day

Posted by Mark Justice at 3:01 PM No comments:

Bonehead of the Day

An 11-year-old boy is accused of destroying thousands of dollars worth of computers by urinating on them.

On Wednesday, Upper Allen Township police said they were notified that a student at Upper Allen Elementary School urinated on a computer cart in a hallway at the school.

The cart contained MacBook computers worth more than $36,000, police said. The computers were damaged beyond repair, they said.

Posted by Mark Justice at 12:00 PM No comments:

What Do you Call A Teenager Falling Into A Sink Hole?

If you said "A good start", you should be ashamed of yourself. I'm expecting my own shame to kick in any minute.

I realized that there has only been one post this month, so here’s a very brief update.

A couple of weeks ago, Dave Wilbanks and I signed off on the edits for Dead Earth: Sanctuary. It’s done and waiting on its slot in the Permuted Press publishing pipeline. When we have a publication date, I’ll let you know.

Here's a new review of Looking at the World with Broken Glass in My Eye.


I have other projects in the work, though nothing is far enough along to announce.

To everyone’s surprise, my weekly humor column continues to appear in a local newspaper. You can read it online. I’ve had a promotion to page 2.


Finally, another Pod of Horror is in the works. I should have more information in about a week. PoH is something I love and the thing I have the least time to produce.

P.S. I HATE the new Blogger interface. The need to “improve” things until they are nearly unusable is an endless source of frustration. For example, see the large space after the book review link? It doesn't appear in the posting window and I have no idea how to fix it. If you have to contact tech support to type a few lines, the system is fucked.
Posted by Mark Justice at 11:39 AM 1 comment: 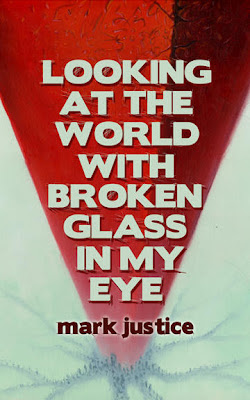 My collection Looking at the World with Broken Glass in My Eye gets the thumbs-up from Gravedigger's Local 16.

You can read the review here and buy the book here.
Posted by Mark Justice at 6:48 AM No comments: