Leaving For the Cruise

Norma and I take off in a few hours. I'll get to spend part of my birthday tomorrow in San Juan, then it's off to St. Thomas, Dominica, Barbados, St. Lucia and Antigua.

We'll be back late on the 30th. Talk you in October. Be good. Don't fight.
Posted by Mark Justice at 7:18 AM No comments:


Posted by Mark Justice at 2:41 PM No comments:

A Taste of Chapin

I've probably seen a few hundred concerts over the last thirty years and nobody -- nobody -- held sway over an audience like Harry Chapin. His story songs were unsubtle and pretty sentimental, but when you were sitting in front of him, he had the power to mesmerize you. He was a consummate entertainer. His tremendous charitable efforts and his campaign to end world hunger set the standard for all other performers. Without Harry, there would never had been "We Are The World" and other similar campaigns. He was the rare individual who believed he had to do more with his success than simply get rich.

Sit back and enjoy one of Harry Chapin's signature songs.

I know I haven't been updating here lately, but my other blog has been busy. If you drop by there, you will probably pick up on the crime fiction reading spree I'm currently on. When we leave on the cruise Sunday, my suitcase will be half clothes/half books.

***
I wanted to get a new Pod of Horror out this week. I just faced up to the fact that it ain't gonna happen. PoH fans, I'll talk to you in October.

I haven't had any writing announcements lately, but the writing continues on two horror projects and two crime pieces. One of the crime things looks to be a mean little novel set here in Kentucky. We'll see how it shakes out.
Posted by Mark Justice at 5:31 PM No comments:

Playing With The New Camera 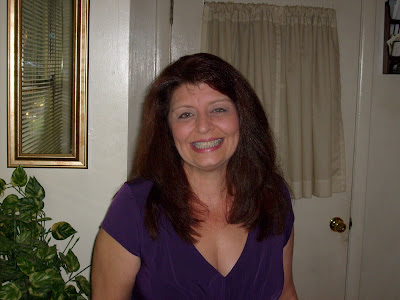 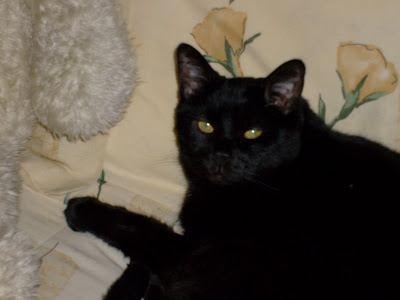 Clark, Lord of the Manor 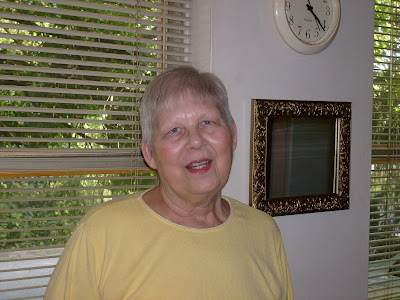 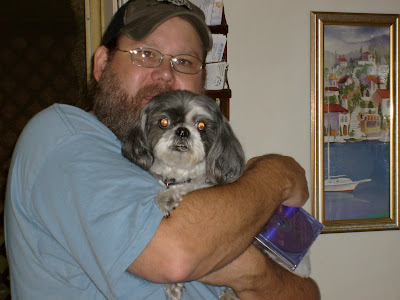 This book has been years in the making, but it looks like In Laymon's Terms will finally happen.

The great horror writer Richard Laymon died in 2001, far too young. While I never met him, I had the honor of interviewing him twice over the telephone. I found him to be like many horror writers I've known -- warm, witty and soft spoken. In other words, the exact opposite of his books.

A short time after his passing, Cemetery Dance announced a memorial anthology of stories in the style of Laymon, along with non-fiction tributes. In February 2003, co-editor Steve Gerlach notified me that my story "The Red Kingdom" had been accepted. It was my first professional sale and it remains the one I'm most proud of.

And how do I know this long-delayed project is getting closer?

Because I just finished signing the signature sheets and shipping them off to the next author in line.

Look for my scrawl, the second sloppiest on the sig sheet. I would tell you who was the sloppiest, but I can't read the name. :^)

Man, I can't wait to have this book in my hands. You can place your order here.
Posted by Mark Justice at 1:16 PM 3 comments:

A friend of mine just read Deadneck Hootenanny and sent along this comment:

THE PEOPLE THAT READ YOUR BOOK WHO DON'T PERSONALLY KNOW YOU ARE GOING TO MISS OUT ON A LOT BY NOT HAVING A MENTAL PICTURE OF YOU IN THEIR MIND WHILE THEY ARE READING. WHEN I WAS READING YOUR BOOK, FRANK WAS YOU IN MY MIND AND THAT MADE EVERYTHING MORE HILARIOUS. I WILL NEVER EAT CHILI AGAIN WITHOUT LOOKING FOR A NOSE! AND POOR RICK--WHAT CAN I SAY!?! ... TIM IS READING THE BOOK NOW--HE'S ENJOYING IT, TOO! WE BOTH HAVE LAUGHED MORE WHILE READING THIS BOOK THAN ANYTHING ELSE WE'VE EVER READ!!!

PLEASE KEEP US INFORMED AS TO WHEN THE MOVIE IS MADE--WE WANT TO BE AT THE PREMIERE!!!!!

Thanks, Anita. You made my day.

I believe you can still get a copy here.
Posted by Mark Justice at 12:52 PM No comments: 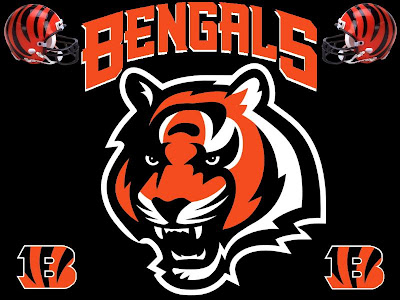 The Bad Thing About The Steelers vs The Browns...

...is that someone gets to win.
Posted by Mark Justice at 3:23 PM No comments:

After weeks of high temperature and humidity, I’ve spent the last few days inside. For the first time in my life, I’ve developed allergies during summer. Every time I’m outside for more than an hour or two my voice gets as raspy as a lifetime three-packs-a-day guy. I even lost it entirely for a couple of days back in August. 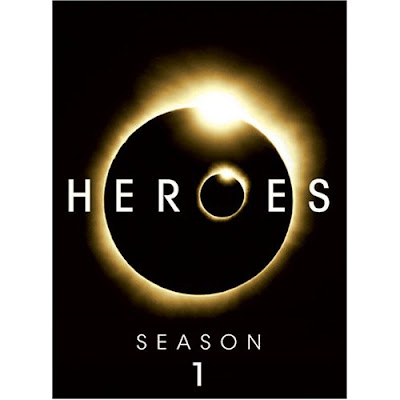 I haven’t done much reading during my self-imposed living room incarceration. I picked up the Heroes Season One box set last week, and Norma and I have been watching a couple of episodes every evening. When the show premiered, we watched the first two episodes before my wacky schedule and inability to keep track of videotapes made me miss the next five (I know, I know; I need Tivo). The series has been a lot of fun so far. In fact, it’s now one of our favorites. I’m looking forward to the addition of Veronica Mars star Kirsten Bell to the cast in the second season.

Here’s a prediction: The ratings success and fast pace of Heroes will have a profound effect on Lost when it returns in the winter. I expect Lost fans will get answers (or something resembling answers) faster now. Unlike many, I never thought Lost’s producers had “lost” their way nor did I believe Season Three was bad. Quite the opposite in fact. But the scheduling of the show and the introduction of so many new characters and storylines without resolution of the show’s earliest mysteries led to a ratings drop. That, I expect, will turn around in the 16 episode fourth season.

And now, a marketing success story. I got my Heroes box set at Wal-Mart. When I opened the package, I found something called “A Wal-Mart Bonus Disc”. The bonus was an extended trailer for the new NBC version of The Bionic Woman and the first four episodes of Friday Night Lights.

The Bionic preview left me cold, but I watched the FNL shows and found myself hooked. 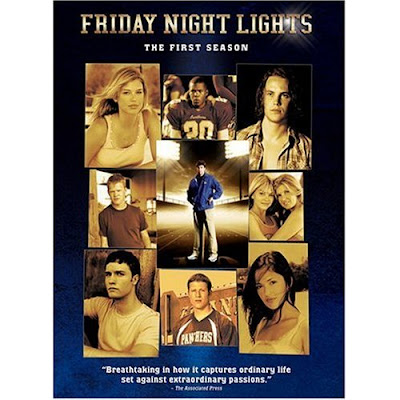 Yes, I went out and bought the first season of FNL. Your evil plan worked, Wal-Mart.

The drama about life in a small football-obsessed Texas town is well written. The acting is subtle and naturalistic. The use of handheld cameras lends the whole thing a documentary feel.

It looks like I have to find time between work and writing and reading and reviewing to watch another show. That’s okay. Sleep is overrated. 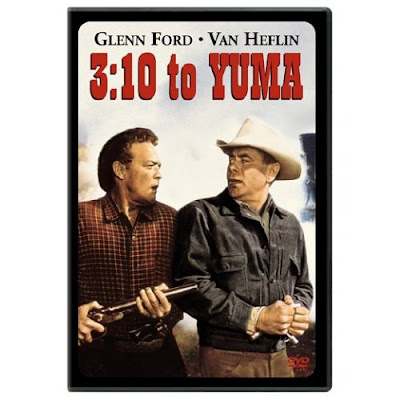 The Western Channel aired the original 3:10 To Yuma Friday night. This was the first time I watched it, at least as far as I remember. My Dad was a huge fan of westerns, so we watched nearly everything that involved a horse and a gun. Chances are I saw this Glen Ford classic when I was younger, but I didn’t remember it.

Ford is remarkable as the villainous Ben Wade and Van Heflin (Old Time Radio’s Philip Marlowe) gives a career-defining performance as the conflicted, desperate family man who is taking Wade to the train depot solely for the reward money. Even though the film seems a little rushed in places (and movie theme songs sung by Frankie Laine never did anything for me), 3:10 To Yuma is a lot of fun. I plan to see the Russell Crowe remake eventually, though it may wait for DVD. I don’t seem to make it to the theater as often as I used to, for a variety of reasons.

Ironically, I’m headed out in a few hours to see the new version of Halloween, since the Bengals don’t play today. 90% of the reviews have been terrible. But a few reviewers – including someone I trust – say it’s a classic. I’ll let you know.
Posted by Mark Justice at 8:35 AM No comments:

Oh, those wacky Japanese.
Posted by Mark Justice at 8:26 AM No comments: 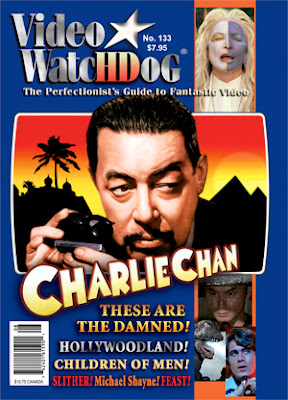 It's another solid issue and highly recommended for hardcore fans of genre films.
Posted by Mark Justice at 6:15 AM 2 comments:

It’s been two scary years and Pod of Horror is still here! Join us for PoH #38, our biggest episode yet.

* Actress Adrienne Barbeau keeps her clothes on (darn it!) as she talks about her long career in the genre and her new film, The Unholy.

* G and Marcy Italiano give us the lowdown on creating the JOHNNY GRUESOME soundtrack.

* Nanci has all the news that fits on The Call of Kalanta.

* And speaking of books, we give away a lot of ‘em on The Tomb of Trivia.

And be sure to drop by the Justice & Wilbanks message board .
Posted by Mark Justice at 1:52 PM No comments: