...in a series of mini-movies released direct to DVD, and written & directed by the show's creator. The details ( sketchy as they are) are on Ain't It Cool News.
Posted by Mark Justice at 3:53 PM 3 comments:

* We still don't have a winner for the Tomb of Trivia, and the prize package keeps growing.

* Grim Rictus finds a unique way to beat the heat.

* A buttload of news on Dave's Poop.

Pod of Horror is hosted by Mark Justice and David T. Wilbanks. Download it at I-Tunes or direct to your here.

And be sure to drop by the Justice & Wilbanks message board .
Posted by Mark Justice at 11:20 AM 2 comments:

Robert B. Parker, another of my favorite writers, has started a blog at Amazon. So far it's a bit lightweight, and the reader comments are about what you'd expect, but hopefully we'll see more interaction from Parker.
Posted by Mark Justice at 8:06 AM 1 comment:

In the August edition of O Magazine, Oprah Winfrey says she and her best friend, Gayle King, are not gay.

Posted by Mark Justice at 4:33 AM No comments:

Who Gets The Flu In July?

That would be me.

It hit without warning late Wednesday night. For several hours I was violently ill. I think I upchucked stuff I had eaten in 1989. Finally, Norma insisted I was going to the ER, and I didn't have the strength or desire to resist.

Once they had me in their clutches, the docs didn't let go for six hours. I was given fluids and anti-nausea drugs. I had a CT scan of my stomach. I threw up many times in the ER garbage can and then I came home, where I spent the next two days mostly unconscious, just as if a film editor had excised 48 hours of my life ("What do you mean it's Saturday???").

That's two ER visits in seven months. The weird thing is, earlier in the week, I got a bill from the hospital for a visit to the ER I didn't make in April. It took four phone calls until the billing department admitted somebody screwed up.

I could've just hung on to that bill.

Anyway, it was a really fun way to wrap up vacation. Forget Disneyworld, I say. Ill-fitting hospital gowns and throwing up in front of a dozen people...now that's making memories!
Posted by Mark Justice at 12:06 PM 1 comment:

Two things about James Lee Burke: I not only think he's the best crime writer in the world, I also believe he's our greatest living author.

Here's a Burke short story at The Southern Review. Try it out.
Posted by Mark Justice at 9:10 PM 1 comment:

After mostly vegging out last week, this appears to be catch-up time. No, not "ketchup". That was all of last week.

I've done a thick and meaty (there's the food metaphor again; I have to get on that diet) chunk of the sequel to Dead Earth: The Green Dawn and passed it along to Dastardly David T. Wilbanks.

I'm hip deep in a pulp novella that's due to my editor at the end of the week.

And another editor has offered to take a look at my novel The Firecracker Man, so I have to get it whipped into submission form. It'll be good to get some feedback on that one.

On the reading front, I'm really digging this: 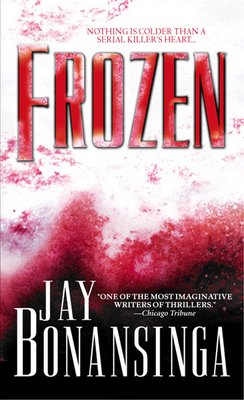 My story "Hole In The Sky", which was the subject of a recently concluded bit o' fun on Pod of Horror, is now up at Horrorfind, as part of my participation in the reading at this year's con. For the whole tedious Gothic.Net fiasco, click here. If that doesn't display the post, click on "Show Original Post".

To read the story at Horrorfind, do the clickin' here.
Posted by Mark Justice at 10:46 PM No comments:

Armand Rosamilia at Carnifex Press just let me know that my story "Closure" will be in the anthology Revenant 2. I'm in good company, as the lineup includes Scott Nicholson and Gene O'Neill. I'll let you know when this comes out.
Posted by Mark Justice at 8:51 AM 2 comments:

Posted by Mark Justice at 9:24 AM No comments: 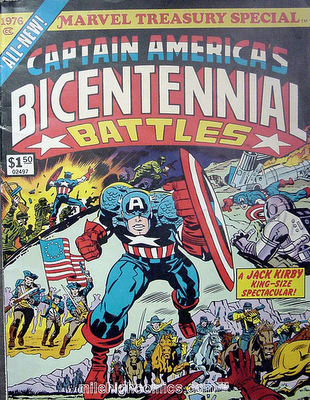 You're looking at the cover to my favorite comic book, by the most beloved comics creator of my childhood, Jack Kirby. This extra-large comic kept me sane during a family trip in 1976. The original fell apart from constant re-reading, but I replaced it years ago. Every July 4th I take it off the shelf and enter that bizarre Kirby world once again, digging Cap's odyssey through American history. I also have the reprint Marvel put out last year, but the sheer hugeness of the original is breathtaking. And the smell of that old paper is a large part of the experience.

We have friends and family coming over later for food and drink. 1776 and Yankee Doodle Dandy are stacked by the DVD player. We're going to have a good day. I hope you do the same.

Here's a little John Adams action to get you started:

Posted by Mark Justice at 8:16 AM No comments:

This Week's Comics: The Best and The Rest 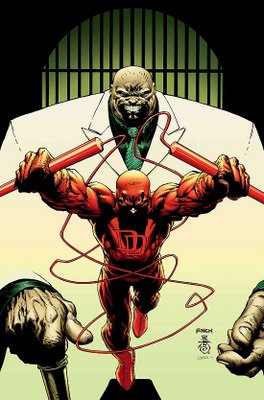 Best of the Week: Daredevil #86

With Matt Murdock, The Kingpen, Bullseye and The Punisher all behind bars in the same joint, you knew an explosion was going to happen, so the only surprise was how writer Ed Brubaker and artist Michael Lark were going to handle it. The answer: they knocked it out of the effin' park.

There's a price on the heads of Fisk and Murdock, so when the inevitable riot breaks out, Matt is forced to team with his arch enemy because of a promise. It's a gruesome battle, incredibly staged by Lark. Like Brian Bendis and Alex Maleev before them, Brubaker and Lark keep Daredevil on a a very real world stage (or as much of one as can exist in a Marvel comic). There are no costumes here, just bad men, one good man and one who's kind of in a gray area.

The best parts of this issue:

* Matt struggling to do what's right, in spite of what he's been through.

* Bulleye's gleeful killing spree, and the way it ends.

* The level of The Punisher's participation.

I hope Brubaker and Lark buck the current trend in comics and stick with this title for a long time to come. 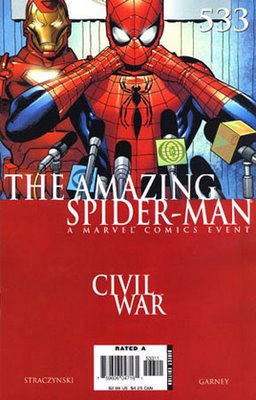 The Amazing Spider-Man #533: If you’re a comic book fan, or if you read the news, you already know that Spidey recently revealed his secret identity on national TV to support the Super Hero Registration Act, part of Marvel’s big Civil War Event. The actual revel occurred in Civil War #2 and has been repeated in what seems like a dozen books in the pat two weeks. This issue deals with the aftermath from Peter Parker’s perspective. Joe Straczynski’s writing can be clunky and overly sentimental at times, but here it’s pitch perfect. After the announcement, Peter throws up while Tony Stark tells him he did the right thing. Peter stands up to Tony not once, but twice, finally showing some backbone after several issues of following the billionaire around like a lap dog. Sample dialogue:

Tony: I’m sorry, Peter. You’re right. I don’t know. I don’t have a family. You do and you’ve always honored them. And–

Peter: You didn’t have a family until right now. If this goes wrong, if I end up regretting this, if anything happens to me – I want your word that you’ll take care of MJ and Aunt May.

Tony: Of course. You have nothing to worry about.

Peter: Good. Because if anything happens to them because of this and I’m still alive, you’re the one who’s going to have something to worry about.


J. Jonah James vows revenge for harboring his most hated enemy within his newspaper, and again, Straczynski treats JJJ like a real person instead of the cartoonish buffoon he normally is. Peter’s enemies start planning. Peter gets sucked into Tony Stark’s plan to fight Captain America and the other heroes who won’t register.

I wasn’t enthused about another crossover event, particularly after the several metric tons of suckage that was DC’s Infinite Crisis, but so far, a lot of the Civil War material has been thought provoking and well done, including this issue of ASM.
Posted by Mark Justice at 4:22 PM No comments:

Will I organize the comic book collection? Will I make a dent in the To Be Read pile? Ha!

In the mail today I got The Rutting Season by Brian Keene and We're All In This Together by Owen King (Stephen King's other son), so the TBR just got a little bigger. 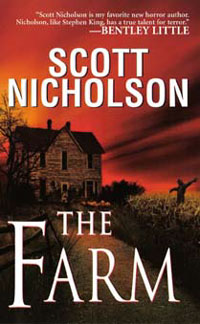 Have I mentioned here how good The Farm by Scott Nicholson is? I know I did on the latest POH. Scott's an amazingly consistent writer. The Farm has a convincing setting, believable characters, real scares and man-eating goats.

Over at The Late Late Show, my story "Mrs Sniffles" just went up, along with an audio version. I didn't have time this week to read the story, so Chris Fletcher tackled it. I'm looking forward to hearing someone else read my work.
Posted by Mark Justice at 1:53 PM No comments: