This year's con was another blast. Thanks to everybody who sought me out to talk about Pod of Horror.

I'm not going to list everybody I hung out with, because I'll forget a ton of people, but as always I found Erik and Luarie Alk to be the nicest people to spend time with, and I appreciate Laurie being my personal bartender all weekend. She made sure my cup was always filled with her home-brewed concoctions.

It was also great talking to John Skipp. Back in the 80s, his novels with Craig Spector were the cutting edge of horror. I just started Skipp's solo novel, The Long Last Call, and it's amazing.

I read "Deadnecks" Friday night. I'd give my performance a C. Here's a pic from Deena Warner: 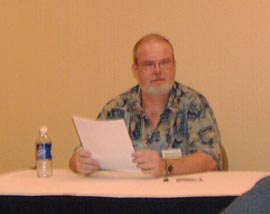 I shared the hour with novelist Deborah LeBlanc, who gave a great performance. Erik Alk captured the post-reading pose: 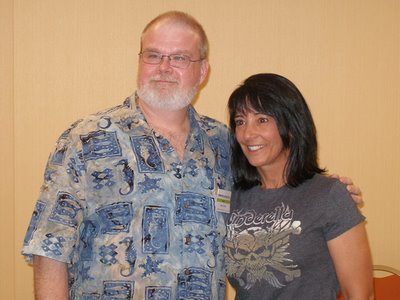 All in all, it was a fantastic weekend. I spent way too much on books and DVDs, just like every year. The bar service sucked and the toilet was screwed up in our room, but I'm ready to go back next year.
Posted by Mark Justice at 11:24 AM