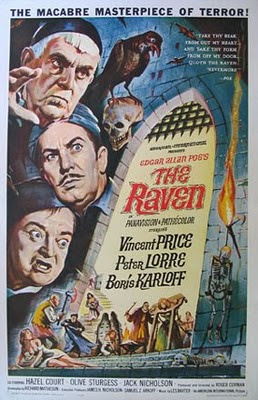 This morning, The New York Times ran an article on SyFy’s so-bad-they’re-fun original movies. This line caught my attention:

Syfy’s Saturday-night movies harken back to the so-called “creature feature” days of local television. Starting on a widespread basis in the 1960s and continuing through the 1980s stations programmed off-peak hours with old horror movies like “Creature From the Black Lagoon.”
Anybody who reads or writes the stuff I love has gotten some variation of this question: “Why horror?”

(Of course, it’s sometimes phrased differently. As in Why do you read that junk/ that crap/that weird shit, and the line is delivered by someone who, upon discovering your copy of Night of the Crabs by Guy N. Smith or Salem’s Lot by Stephen King or, going back further, a copy of Famous Monsters of Filmland magazine, looks like he or she just bit into a nice steak only to find it was filled with thick, squirming maggots.)

Chiller Theater ran on Channel 13 in Huntington, WV, from the time I was a child until sometime in the 80s. By the end, they ran the pre-packaged Elvira show and I rarely tuned in.

When I say “a child”, I mean exactly that. One of my earliest memories is a Saturday when I was sick and my parents let me stay up to watch Chiller Theater. I remember walking down the stairs from my bedroom, realizing I had never walked down those steps at night.

We moved from that house when I was four.

So this horror thing has been with me for a while.

Channel 13 (which went by the call letters WHTN when I first tuned in, then later became WOWK), unlike many stations in other markets, never had a horror host, at least that I recall. For a couple of years, they had an out of focus dude with Christmas lights on his clothes moaning about something, but I usually took advantage of his time on-screen to run to the bathroom or get a snack. Remember, those were the pre-VCR or DVR days.

During one period, Chiller Theater had Barnabas Collins doing the weekly opening. Channel 13 was an ABC affiliate at the time (they’re with CBS now) and Dark Shadows was a popular ABC daytime soap (and the only soap with vampires and werewolves). Jonathan Frid, the actor who played the tortured, blood-sucking Barnabas, made a publicity stop in Huntington, and the TV station got him to record some brief segments for Chiller.

Since Dark Shadows was also one of my favorite shows, this was awesome.

At least for the first couple of years.

After a while, it sunk in that the TV station only had Frid for a short time, and they ran the small handful of Barnabas bits over and over and over.

But, God, I loved all those horror movies. Chiller was where I was introduced to the classic Universal monsters and the darker and sexier Hammer flicks. It’s also where I saw the AIP library. Even then, I knew a lot of it was crap, but who could resist tuning in to The Ghost of Dragstrip Hollow? And don’t forget, AIP also gave us all those cool Vincent Price movies based on the works of Poe that ran every few month during my adolescence.

So if you are wondering “Why horror?” it’s because of Chiller Theater. And Dark Shadows. And Famous Monsters of Filmland and Marvel Comics like Werewolf By Night and Tomb of Dracula and Ghost Rider and The Living Mummy.

***
I got some writing done this weekend, including my latest section of the third Dead Earth novel and another chapter of Donovan Pike and the City of the Gods (that’s three chapters in a week, kids) over at Pulp Nocturne.

I started revisions on The Dead Sheriff today. This is going to take more than the couple of days I set aside for it. There are so many red editorial comments on every page, it looks like the manuscript was used to clean up after a Manson Family party.

I need to hire an editor to edit my stuff before it goes to the actual editor.

Anyway, there are several good editorial suggestions regarding the plot, and I have to give them serious consideration. This will be my major project for the next week or so, along with prepping the next episode of Pod of Horror.

I’ll be getting back to a novella set in West Virginia. It’s a ghost story, and I did some research for it a couple of months ago. It will be good to get the story written.

After that, I’m revising a horror novel to submit to a publisher.

I also have an idea for a 12-issue horror/SF comic book series. I’d like to type up the proposal and script the first issue, but it has to sit on the back row for a while. My 2011 vow is to stick to my schedule. Besides, some ideas get better with age.

Now I need to go find a copy of The Ghost of Dragstrip Hollow.

I lived in southern West Virginia -- Raleigh County. We couldn't get Chiller Theater but my cousin who lived nearby could. I spend many Saturdays at her house watching Chiller Theater. Good times.

I didn't realize until I was much older what an influence Chiller was on my life. I loved those movies, especially the worst, cheesiest ones.

Thank you for your post! I was just reminicing on Facebook about the good movies on a Saturday night and had mentioned Chiller :)
Seymour the Host was so awesome...
I used to stay up and watch it with my Grandmother..such great memories!

I lived in Ashland, KY growing up, and Chiller Theater is THE most influential phenomenon in my life.